The Goings Law Firm, LLC is pleased to announce that Horry County Schools have agreed to pay $260,000.00 to a Horry County School Board Member who was injured in a trip and fall due to defective and unsafe steps at the district office.  The steps violated several state and federal safety codes in failing to have required hand rails.  Our firm was successful in proving that several prior employees of the school district had fallen due to the lack of hand rails.  The victims of the prior falls and injuries had requested the administration add safety railings.   The safety railings would have prevented the prior falls.  Unfortunately, it only after our client fell and sustained severe injuries that the Horry County School system chose to do anything to fix this code violation.  Below is a picture of the location where our client fell only after hand rails were installed: 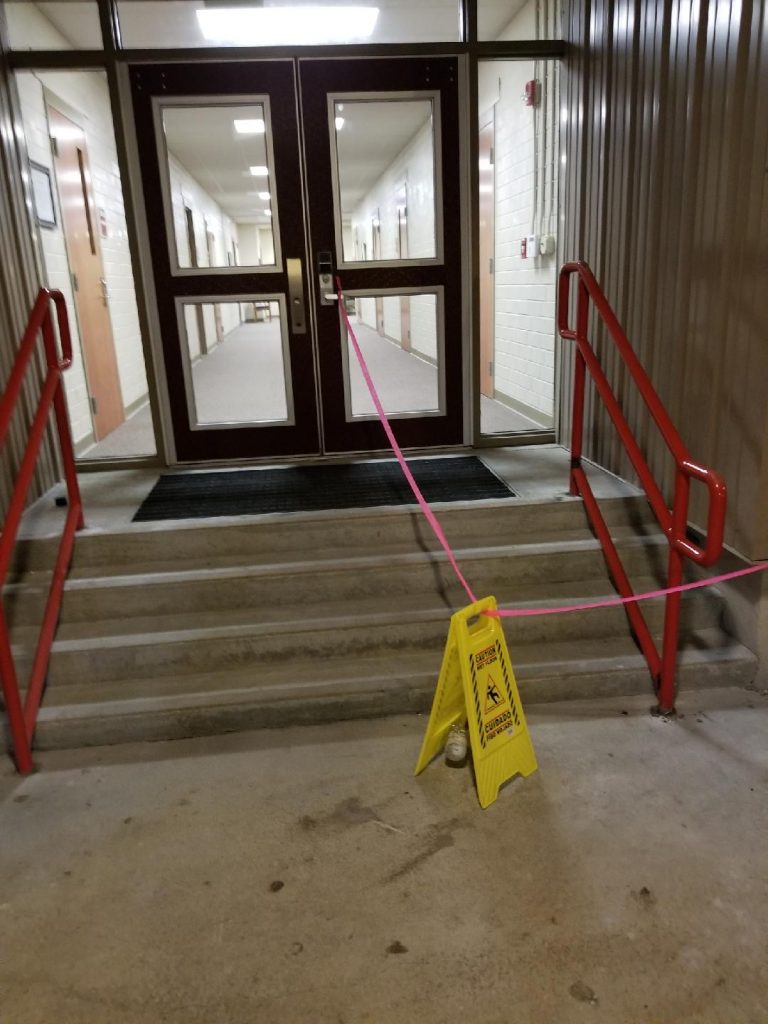 The fall resulted in a severely broken arm and extensive reconstruction surgery.  Here is an x-ray of our client’s arm after surgery showing extensive metal hardware plates and screws. 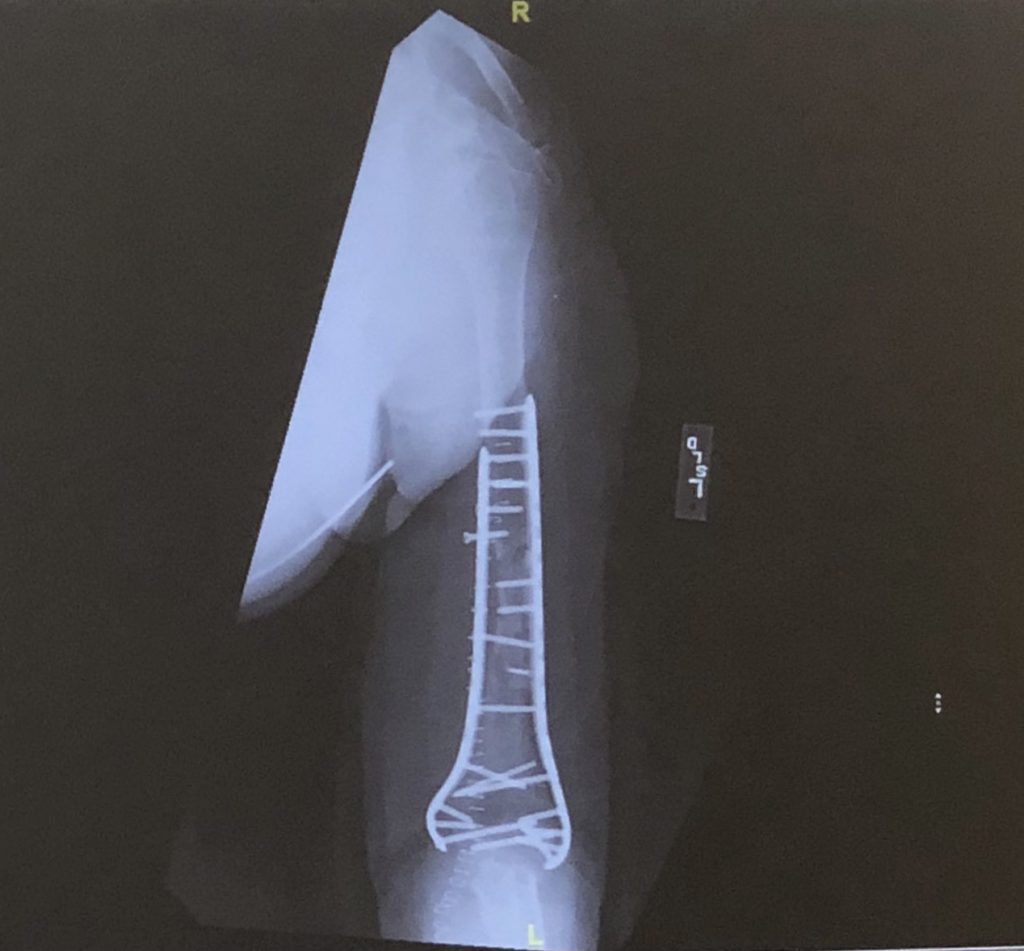 This injury was completely preventable if Horry County Schools would have installed the required handrails.  The school system had prior notice of the defective condition and prior injuries in this location, but did nothing about it.

Injuries that result from preventable falls caused by trips or slips at businesses or public property give rise to civil liability, allowing for financial compensation to cover medical bills, loss of enjoyment of life, pain and suffering, and loss wages and earnings.   If you or a loved one have suffered injuries due to a property owner violating safety code requirements or failing to properly construct or maintain pedestrian traffic areas of ingress and egress, please contact us today at 803-350-9230 for a free, no obligation, consultation. We are happy to explain your legal rights and represent you if the need arises.

This settlement was featured in Horry County’s the  The Sun Newspaper.  Here is the article:

Horry County Schools will shell out hundreds of thousands of dollars after voting to settle a lawsuit brought by one of its own board members.

The district’s school board voted unanimously Monday to pay $260,000 to settle a 2019 lawsuit from board member Sherrie Todd, who represents district 2 covering parts of Myrtle Beach and Carolina Forest. Todd’s suit alleged she suffered a serious fracture to her arm that required three surgeries after she fell on the stairs leading to a school board meeting in 2017.

Ahead of the vote, the school board received legal guidance in executive session, where matters aren’t made public. Todd recused herself from executive session during the discussion on the lawsuit and abstained from voting.

The lawsuit alleges the spot where Todd fell should have had a railing, and there was no other entrance for Todd to access the door where she was attempting to enter. The district knew or should have known about the safety hazard, according to the lawsuit, which also says at least two other people have been seriously injured on the same stairs. The district denied these claims in its response, The Sun News reported at the time the lawsuit was filed.

Todd’s injuries were a result of “her own negligence, carelessness, gross negligence, recklessness, willfulness and wantonness,” the district initially responded, arguing she failed to look where she was walking and wore inappropriate shoes. Last week, Todd had offered to accept a $300,00 settlement from the board, court records show. She also attempted to get workers’ compensation for her injuries, but the district opposed that, asserting she was a board member, which differs from a district employee. The two parties were set to go to trial last month, but the date was delayed so the two parties could attempt to settle out of court, records show.

Categories: In the News, Results, Slip and Fall

Columbia-based Goings Law Firm, LLC, through the work of attorneys Robert Goings and Jessica Gooding, recently obtained a large verdict against a drunk driver. Our client, a South Carolina highway worker, was seriously injured in an accident caused by a habitual drunk driver in 2018. After deliberating for just three hours, the jury returned with a verdict, awarding our client a staggering $12.5 million in damages.

The $12.5 million in damages consists of $3.5 million in actual damages and $9 million in punitive damages, which are designed to punish a defendant for excessively reckless behavior.

Back in 2018, our client was traveling northbound on Interstate 77 as part of a caravan of construction vehicles, clearing construction debris from the highway, when a Columbia-based attorney rear-ended our client’s truck. At the time of the accident, our client’s truck actually had flashing, lighted signage on the rear of his vehicle, instructing other drivers to keep left.

Our client sustained injuries to his neck, shoulders, and lower back due to the collision, ultimately costing around $380,000 in medical expenses.

We presented evidence that demonstrated the culprit’s liability. He had a staggering BAC (blood alcohol content) of .148 around four hours after the crash. The legal limit is a BAC of .08. This same man had been charged with driving under the influence a total of three times in the past, incurring two DUI’s in South Carolina and another in Virginia. While the defendant’s attorney argued that his past convictions were irrelevant to the case at hand, Goings Law Firm, LLC established that the driver had a dangerous pattern of driving while intoxicated that ultimately led him to severely injure our client.

As part of his closing argument before the jury, Robert Goings stated, “You need to return a verdict that is big enough to make it in the newspaper, to send a message to any drunk driver that is out there that drunk driving is not tolerated in Richland County — that our lives, our families’ lives are worth more than to be endangered by a reckless, careless drunk driver.”

The size of the verdict that Goings Law Firm, LLC was able to obtain for our client was called “unprecedented” by Steven Burrit, the executive director for the South Carolina branch of MADD (Mothers Against Drinking in Driving). Of the verdict, Burrit added, “I can’t recall hearing anything that large in a DUI case. That jury took the opportunity to express just how serious this crime is, and how frustrating it is to see this kind of behavior, which puts all of us at risk.”

Robert Goings indicated that the firm would do everything in its power to ensure that their client was able to collect on the verdict.

If you have been injured in an accident that was caused by a drunk driver in South Carolina, contact Goings Law Firm, LLC today. We have the experience and skills to independently investigate your claim, gather evidence to support it, and aggressively seek the compensation you deserve. With our proven track record of success, you know your case is in good hands when you hire us. Contact us today at (803) 350-9230 for a free case evaluation.