Memorial Day Truck Accident on I-20 near Columbia

Memorial Day Truck Accident on I-20 near Columbia 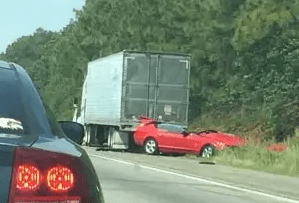 On May 25, 2014, during Memorial Day weekend, a significant motor vehicle accident occurred on I-20 near the Richland and Kershaw county lines. This accident is currently under investigation by the South Carolina Highway Parol, and the cause of the crash has not been released. The crash caused both westbound and eastbound lanes of I-20 near the Kershaw County and Richland County lines to be closed for most of the day.

Two cars were significantly damaged in the collision that also involved a large tractor trailer semi-truck.  A small truck was overturned, and a red mustang had the top of the car torn off. The 18-wheeler did not appear to sustain as severe of property damage. The extend of the injuries caused by this accident is currently unknown, but significant trauma was reported because persons were transported from the to Palmetto Health Richland in Columbia by helicopter. To learn about common causes of truck accidents, read this article.

Our prayers go the drivers, passengers, and families of those involved in this accident. If you or a loved one has been injured or killed in a accident involving a car or truck, we are here to help you.  Truck accidents cause significant injuries, and many times result in wrongful death.  Please contact us today to see if we can help you and your family recover from trucking related accidents. We will work to secure the financial compensation that you deserve.  Please call Robert F. Goings of the Goings Law Firm, LLC at (803) 350-9230 for a free case evaluation.

National Transportation Safety Board (NTSB) data has confirmed that driver error is the leading cause of large truck accidents.  Driver-related factors contributed to 31 percent of fatal truck accidents. In fact, the NTSB found that fatigue and overwork were responsible for up to 40 percent of all truck accidents.  This is why Federal law regulates how much time a truck driver can spend on the road. These are referred to as hours-of-service (HOS) regulations. HOS regulations dictate how long a driver can stay behind the wheel without a break and how many hours they can drive within a given time span. Many trucker drivers choose to drive past the point of fatigue because they are under pressure from customers or shipping companies. Studies have shown that some trucker turn to illegal substances to stay awake during their long hours on the road. Trucking companies become liable when drivers violate the law or cause trucking accidents.

According to the Federal Motor Carrier Safety Administration, several types of truck driver negligence or errors play a major role in causing serious tractor-trailer accidents. Some of the main factors in truck accidents include:

Other common causes or types of truck accidents that top the list include:

Have Questions for a Truck Accident Attorney in South Carolina?

If you have any questions about truck or eighteen wheeler accidents in South Carolina, it is best to contact a our Truck Accident Attorneys for a free consultation. The Goings Law Firm, LLC is available at (803) 350-9230 or you may contact us online to answer your questions. 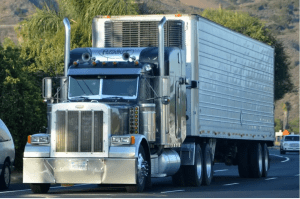 In 2014, the National Highway Traffic Safety Administration (NHTSA) released its 2012 Annual Report which includes data regarding the number of people injured or killed in accidents involving large trucks. The NHTSA defines large trucks as vehicles with a gross weight of more than 10,000 pounds. These large trucks are also called semi trucks, 18-wheelers, or tractor trailers.

To view the NHTSA’s 2012 Traffic Safety Facts for Large Trucks published on January, 2014, click below:

With so many deaths and injuries occurring each year from trucking accidents, it’s important to understand your rights as a motorist. If you or a loved one has been involved in an truck or eighteen wheeler accident in Columbia, or anywhere in South Carolina, and you believe the truck driver or company is at fault, you may have important legal rights. You shouldn’t have to pay for medical expenses, lost wages, or property damage due to someone else’s fault. You may also recover damages for pain and suffering, loss of enjoyment of life, and future medical expenses that you may incur.

Contact the Goings Law Firm, LLC and we will investigate your accident, file a claim on your behalf, and work hard so you get the compensation that you deserve. Call (803) 350-9230 for your free consultation.