Fatalities and serious workplace injuries are on a rise in the United States.  Year after year, workplace deaths are increasing South Carolina.  If a loved one has died at work, or you have suffered a serious on the job injury, it is important to hire an experienced workers’ compensation attorney so that you are fully protected under the laws of South Carolina.  Without an attorney, the insurance company can take advantage of you and quickly deny benefits that the law affords you for medical treatment, pay while not at work, and disability payments for permanent injuries or death.  The insurance company has a team of lawyers, so should you!

Based on the current National Census of Fatal Occupational Injuries published by the U.S. Department of Labor Statistics, there were a total of 5,190 fatal work injuries recorded in the United States in 2016, a 7-percent increase from the 4,836 fatal injuries reported in 2015, the U.S. Bureau of Labor Statistics reported today. (See chart 1.) This is the third consecutive increase in annual workplace fatalities and the first time more than 5,000 fatalities have been recorded by the Census of Fatal Occupational Injuries (CFOI) since 2008. The fatal injury rate increased to 3.6 per 100,000 full-time equivalent (FTE) workers from 3.4 in 2015, the highest rate since 2010.  https://www.bls.gov/news.release/pdf/cfoi.pdf 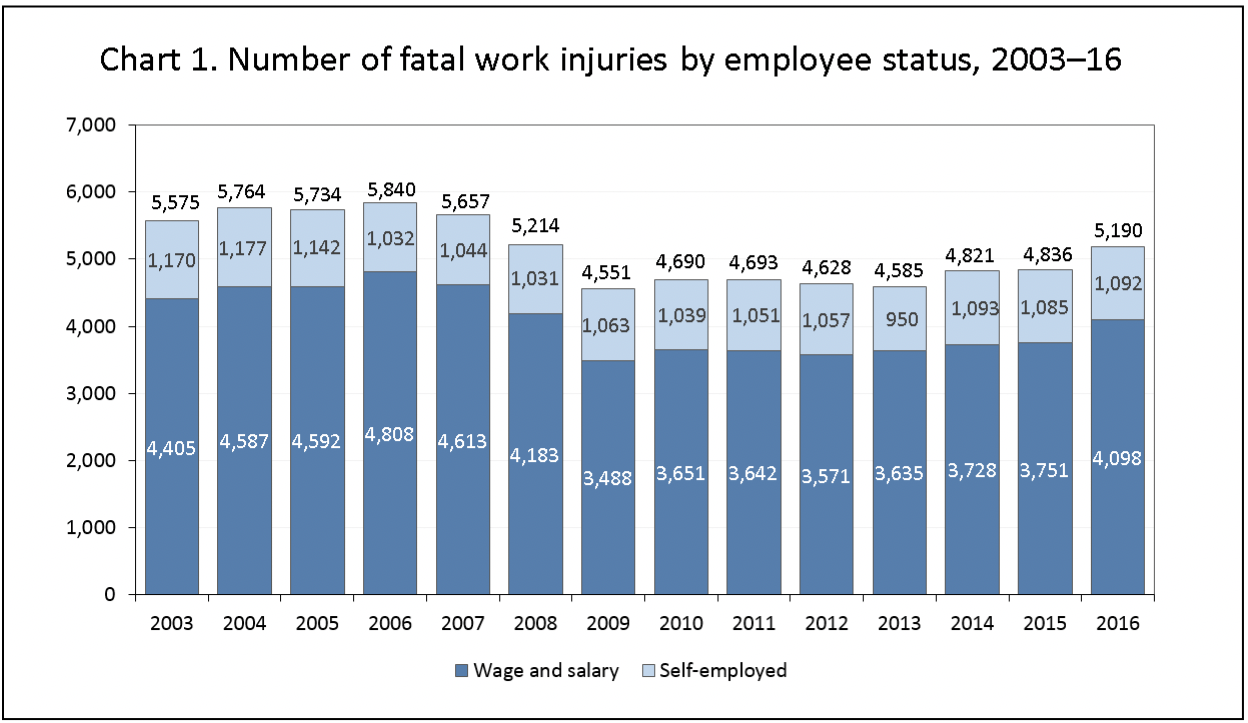 Work injuries involving transportation incidents remained the most common fatal event in 2016, accounting for 40 percent (2,083). Violence and other injuries by persons or animals increased 23 percent to become the second-most common fatal event in 2016. Two other events with large changes were exposure to harmful substances or environments, which rose 22 percent, and fires and explosions, which declined 27 percent. 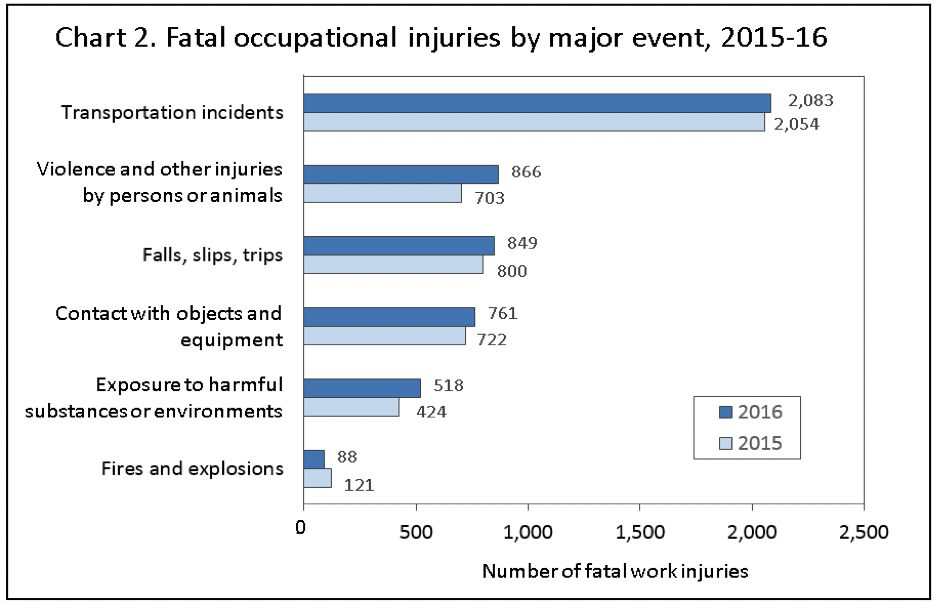 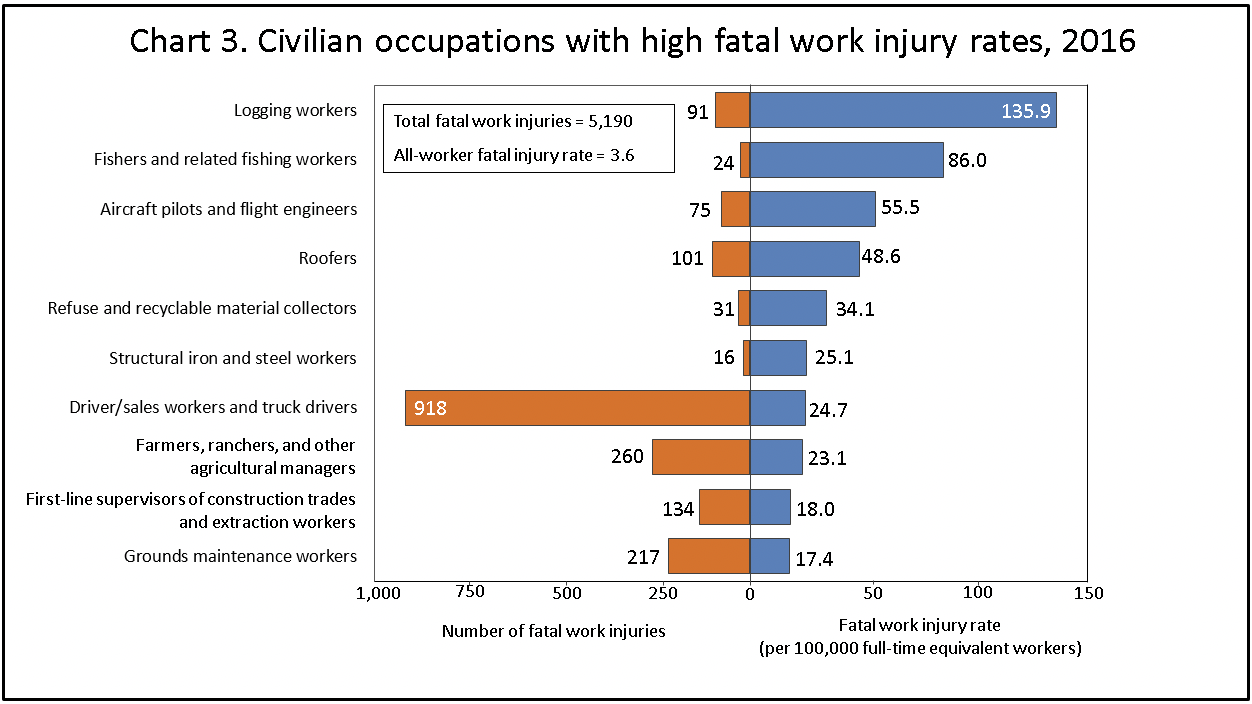 Logging workers continued to have a high fatal injury rate in 2016, at 135.9 fatalities per 100,000 FTE workers.  A number of occupations recorded their highest fatality counts in 2016. This includes first-line supervisors of construction trades and extraction workers with 134 fatal injuries; landscaping and groundskeeping workers, 125; roofers, 101; tree trimmers and pruners, 84; driver/sales workers, 71; automotive service technicians and mechanics, 64; and farmworkers, farm, ranch, and aquacultural animals, 61.
Fatal work injuries among protective service occupations increased by 68 fatalities (32 percent) in 2016 to a total of 281. This included an increase of 24 fatalities among police officers, 13 fatalities among first-line supervisors/managers of law enforcement workers, and 23 fatalities among miscellaneous protective service workers, including crossing guards and lifeguards, ski patrol, and other recreational protective service workers. Police officers incurred 51 homicides in 2016, up 50 percent from 34 fatalities in 2015.
Asian, non-Hispanic workers incurred 160 fatal injuries, up from 114 in 2015, which was the highest percentage increase (40 percent) among any race or ethnic origin. Black or African-American, non-Hispanic workers also had a large percentage increase (19 percent), with 587 fatal injuries compared to 495 in 2015. The rate of fatal injury for both groups also increased. Hispanic or Latino workers had 3 percent fewer workplace fatalities in 2016 with 879 fatalities, down from 903.
Foreign-born workers make up about one-fifth of the total fatal work injuries. Thirty-seven percent of these workers were born in Mexico, followed by 19 percent from Asian countries.  Workers age 55 years and over had 1,848 fatal injuries, the highest number for this cohort since CFOI began reporting national data in 1992. In 1992, workers age 55 and over accounted for 20 percent of fatalities; in 2016, they accounted for 36 percent. These workers also have a higher fatality rate than other age groups.
The number of workplace fatalities in private industry increased 7 percent in 2016. This was led by an increase in service-providing industries, which were up 13 percent to 2,702 from 2,399. Fatal workplace injuries to government workers increased 9 percent overall to 497, with a 9-percent decrease in federal employee fatalities that was more than offset by increases in state and local government fatalities, up 20 percent and 13 percent, respectively.  Mining, quarrying, and oil and gas extraction and manufacturing both experienced large decreases in workplace fatalities in 2016, decreasing 26 percent and 10 percent, respectively.  Fatal injuries in the leisure and hospitality sector were up 32 percent (225 to 298) and reached an all-time series high in 2016. This was largely due to a 40-percent increase in fatal injuries in the food services and drinking places industry from 118 to 165.  A total of 36 states had more fatal workplace injuries in 2016 than 2015, including South Carolina.

Don’t Settle for Less than the Best- Hire an Experienced Lawyer.

If you or a loved one has suffered a work place fatality or a serious injury while on the job, you need to hire an experienced lawyer to help navigate you through the complex workers’ compensation laws.  Don’t settle for less than the best, contact the lawyers at the Goings Law Firm today to see how we can help you.  It will not cost you anything for a free consultation, call us at 803-350-9230 today.