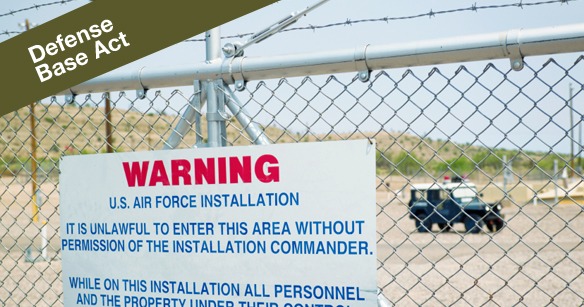 What is the Defense Base Act?

The Defense Base Act (DBA) is an extension of the Longshore and Harbor Workers’ Compensation Act (LHWCA).  This Act provides disability compensation and medical benefits to employees and death benefits to eligible survivors of employees of U.S. government contractors who perform work overseas.  The DBA incorporates the provisions of the LHWCA, with few exceptions.

What is Covered under the Defense Base Act?

The Defense Base Act applies to the following situations:

If any one of the above criteria is met, all employees engaged in such employment, regardless of nationality (including U.S. citizens and residents, host country nationals (local hires), and third country nationals (individuals hired from another country to work in the host country), are covered under the Act.

What Type of Benefits are Allowed under the Defense Base Act?

The Defense Base Act provides disability and medical benefits to covered employees injured in the course of employment and death benefits to eligible survivors of employees killed in the course of employment. Compensation for total disability is two-thirds of the employee’s average weekly earnings, up to a current maximum rate per week. Compensation is also payable for partial loss of earnings.
Death benefits are paid at the rate of one-half of the employee’s average weekly earnings to a surviving spouse or one child, or two-thirds of average weekly earnings for two or more eligible survivors up to the current maximum rate of per week. The Defense Base Act also incorporates the LHWCA’s provision for payment of reasonable funeral expenses not exceeding $3,000.00.

Permanent total disability and death benefits may be payable for life, and are subject to annual cost of living adjustments. The LHWCA minimum benefits rate, however, does not apply to DBA claims.

The injured employee is also entitled to medical treatment by a physician of his/her choice, as the injury may require.

If an employer fails to secure payment of compensation, an injured employee, or his/her survivors in case of death, may elect to sue the employer for tort damages on account of such injury or death. In such action the defendant may not plead as a defense that the injury was caused by the negligence of a fellow servant, or that the employee assumed the risk of his employment, or that the injury was due to the contributory negligence of the employee.

In addition, an employer who fails to secure the payment of compensation when required shall be guilty of a misdemeanor and, upon conviction thereof, shall be punished by a fine of not more than $10,000 or by imprisonment for not more than one year, or both. If the employer is a corporation, the president, secretary, and treasurer shall also be severally liable for such fine and imprisonment. These three corporate officers shall also be personally liable, jointly and severally with the corporation, for any compensation or other benefit payable under the Act with respect to the injury or death of any of its employees.

Have you been injured while working as a Government Contractor Overseas?

If you have been injured while employed as a government contractor overseas for the U.S. Government, you may be entitled to compensation and benefits under the Defense Base Act.  Contact the Goings Law Firm, LLC today at (803) 350-9230 to represent you in your Defense Base Act claim.